What is a greenway?

Greenways are multi-modal public transportation corridors that connect people and places together. They are often used by people walking, wheeling, and cycling to work, school, retail areas, parks, and other neighbourhoods. The greenway will include a two-way protected bicycle lane for people cycling, and improved pedestrian facilities for people walking and wheeling. Greenways are also envisioned to include space for additional landscaping and trees.

What are the benefits of greenways?

Greenways provide a variety of benefits that ultimately affect the sustainability of a community’s economic, environmental, and social health. For example, greenways create value and generate economic activity, make it easier for people to use sustainable modes of transportation, improve health by encouraging active living, and enhance the public realm and community identity.

What types of users will be allowed on the greenway?

The primary users of the Greenway will be people walking and cycling, but could also include skateboarding, rollerblading, using a wheelchair or pushing a stroller, among other uses. Motor vehicles will still be able to use Agnes Street.

Why is the City building a greenway along Agnes Street?

The idea of creating the Agnes Street Greenway was first identified in the Downtown Community Plan and further described in the Downtown Building and Public Realm Design Guidelines. It is a key priority in City Council’s 2019-2024 Strategic Plan, and the alignment was confirmed in the recently adopted Downtown Transportation Plan. Agnes Street was selected because it provides a direct connection between New Westminster SkyTrain Station and the Victoria Hill neighbourhood and Pattullo Bridge. This corridor also connects several community facilities, including Douglas College and Qayqayt Elementary School.

What are the objectives of the Agnes Street Greenway?

The Greenway design will be guided by the following objectives:

Why did the City build an interim Greenway now?

The interim Greenway has been constructed through a ‘quick build’ process using low cost, temporary materials. This will allow people the opportunity to experience the changes to Agnes Street and provide informed feedback based on their experience about how the greenway can be improved for all road users. Being able to experience the interim Greenway could spark questions, concerns and ideas you might not have considered without using the facility first. It will also allow the project team to collect data and observations and make adjustments easily before a permanent design is finalized and constructed.

The design of the Greenway aims to limit changes to curbside uses but changes to parking were required. Loading zones and on-street parking was maintained on both sides of the street for much of the corridor, with the exception of one block between Seventh Street and Sixth Street and two blocks between Merivale Street and First Street (shown in solid red on the map). On these blocks, parking is provided only on the north side of the street. This will be extended eastward to Dufferin Street in the future as part of the permanent Greenway (shown in dashed red on the map). On the two blocks between Sixth Street and Merivale Street, parking on the south side of the street remains but has been shifted away from the curb to create space for the interim Greenway. Overall, approximately 75% of the on-street parking has been maintained along Agnes Street, and about 90% preserved in the broader area. 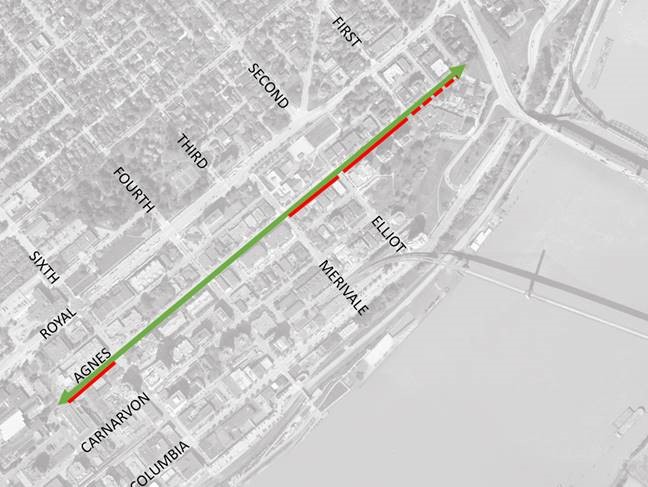 The design requires changes to vehicle access and circulation in the Downtown neighbourhood. Vehicle traffic is now one-way westbound for the two blocks between Merivale Street and Sixth Street to provide the space needed to accommodate dedicated cycling facilities and buffers while also retaining on-street parking on both sides of the street in those blocks. These changes also help to reduce the issue of non-local motor vehicle traffic using Agnes Street and Fourth Street and to reduce traffic volumes overall to create a more comfortable experience for greenway users. Vehicle access to residential buildings has been maintained, including emergency vehicle requirements. Two-way vehicle travel has been maintained on the remaining portions of Agnes Street and adjoining streets to ensure residents and visitors can reach their destinations, including Qayqayt Elementary School.

Also as outlined in the Downtown Transportation Plan, the turn lane from Royal Avenue to Merivale Street will be closed to calm traffic at the front of Qayqayt Elementary School and to support a new bikeway between Downtown and Uptown New Westminster.

IMPORTANT UPDATE: Although we had been planning to convert Fourth Street to one-way southbound based on the recommendations of the Downtown Transportation Plan, we will be deferring this change for the time being. This is in response to concerns raised about transit service to the Agnes Street area. To enable continued transit service northbound on Fourth St, we will be preserving two-way traffic operations for the time being. 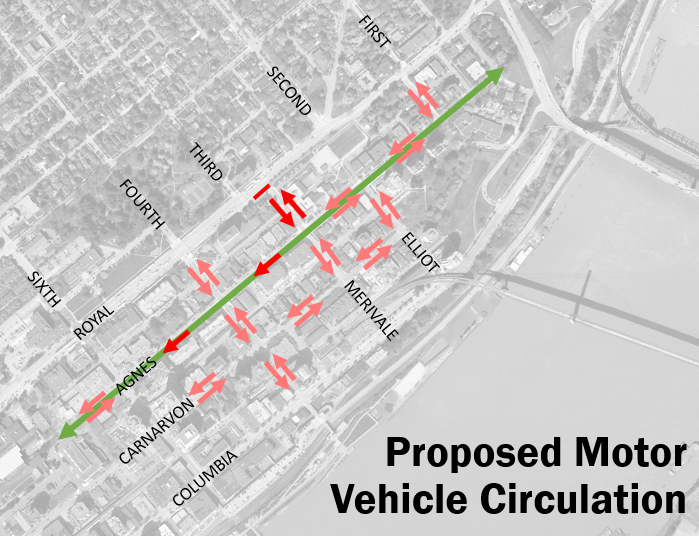 The recommended one-way westbound traffic on Agnes Street required re-routing of the #103 and #105 bus routes. These changes are continuing to be adjusted based on concerns raised about transit changes and accessibility. We will also continue to work closely with TransLink and Coast Mountain Bus Company on the long-term routing of transit in this neighbourhood, with a strong focus on accessibility for seniors and people with disabilities.

For the interim phase, the #103 and #105 bus routes will continue to use westbound Agnes Street between Elliot Street and Fourth Street. The existing stop on Agnes Street at Elliot Street will remain. The eastbound/northbound routing will change for both routes, as outlined below.

IMPORTANT UPDATE: We are actively working with TransLink and Coast Mountain Bus Company to address concerns raised by residents living near Agnes Street and First Street related to the #105 bus route. Any adjustments to the bus routing will be updated here. 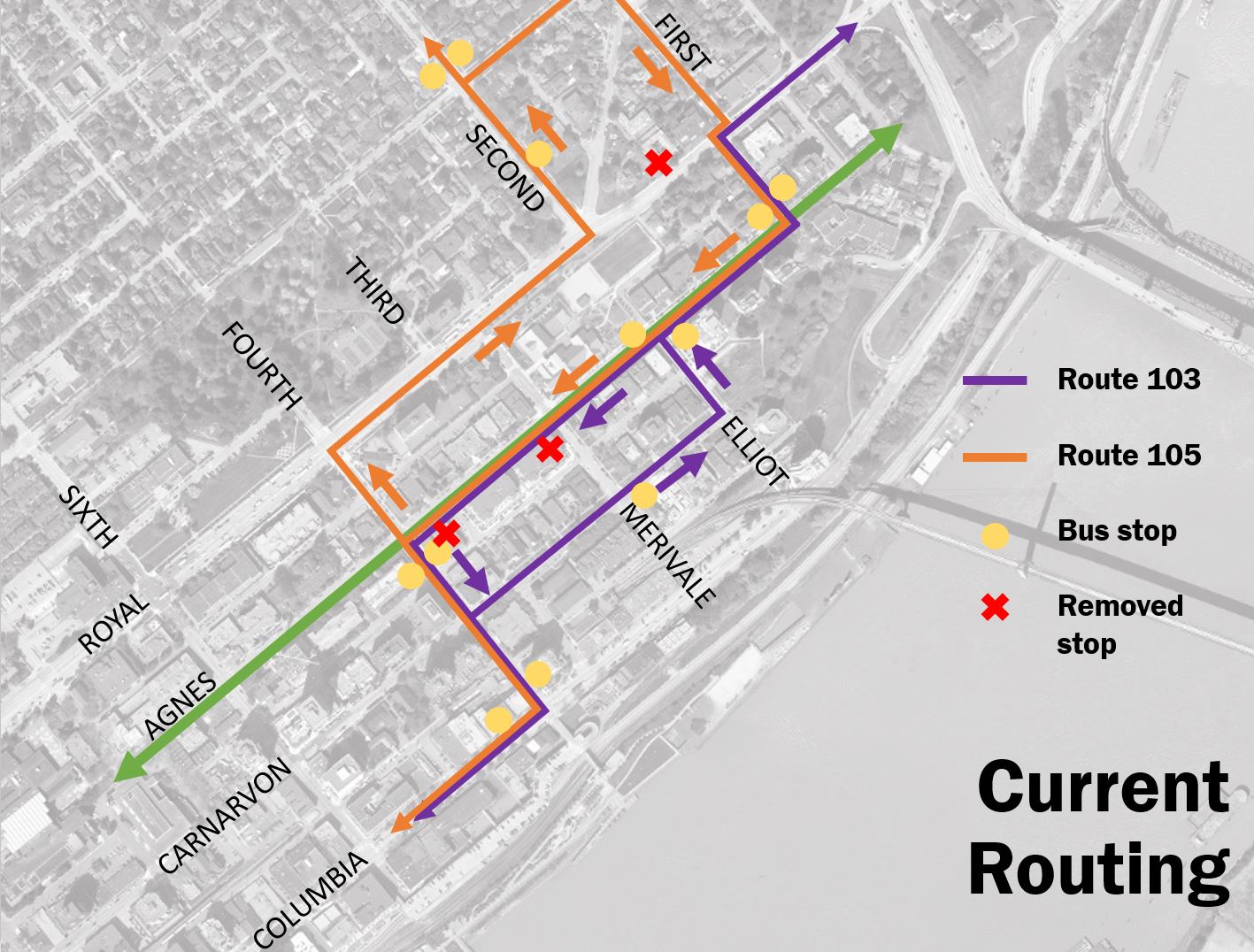 How will the City consult with stakeholders and residents?

We want to hear what you think about the interim treatment, how you plan to use the Greenway, and what your priorities are for the final design. In February and March, we will host a range of engagement opportunities for stakeholders and the public to get involved in and provide input, including stakeholder conversations, a community survey, and virtual open houses. Later this spring, we will invite you to provide feedback on the preferred design concept for the permanent Greenway. Stay tuned for more details on the engagement process.

How does the greenway affect access to Qayqayt Elementary School?

The designated school drop-off/pick-up zone on Agnes Street at Qayqayt School is unchanged. On-street parking is available along both sides of Agnes Street between Merivale and Sixth Street, and existing loading zones remain in place.  A portion of Agnes Street (Merivale St. to Sixth St.) has been converted to one-way, westbound traffic.  Agnes Street still accommodates two-way motor vehicle traffic between First Street and Merivale Street, including adjacent to Qayqayt School.  The turn lane from Royal Avenue to Merivale Street has been closed to calm traffic at the front of the school and to support a new bikeway between Downtown and Uptown New Westminster.  (The parking lot at the school can be accessed from Merivale Street heading north).

The interim Greenway offers parents and children the opportunity to walk, roll or bike to school along a dedicated route where proper physical distancing is possible. Traffic calming measures have been introduced around the school aimed at improving safety at school drop-off and pick-up times, and overall traffic volume in the area has been reduced to prevent short-cutting through the Agnes Street neighbourhood by non-local motor vehicles accessing the Patullo Bridge.